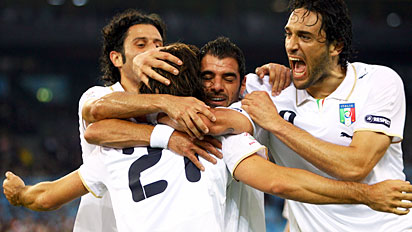 What a drama!
What a drama!
And oh what a relief after its all over!
Italy has risen up & qualified for the Quarter-Finals of EURO 2008!

Before tonight's game, Italy was at the bottom of the Group C.
They lost their first game, drew the second & tonight's game was their last chance.
They had to win tonight's game to secure enough group points to be 2nd place in the group.
Only the 1st & 2nd place in each group get to qualify for the quarter finals.

However, they had a slight problem though...
Romania is currently 2nd place in the group with one point more than Italy.
Therefore, if Romania were to win their game against Holland, Italy might as well not play theirs because Romania will have more points anyway!
Romania will have to lose for Italy to go through.

Italy faced a tough game tonight against a reputable foe, France.
Both teams had the same points in the group so both teams will definately fight for a win.
Both teams started the game with equal determination & desire to win.
But Italy stood out from the very beginning with their pin-point passing, cohesion & sturdy defence.
France played rough & worked very hard but the team just did not click.
Soon they were out-played...
In the end, Italy won 2-0.

But the Holland vs Romania game was running simultaneously...
If Romania win tonight, Italy's win would mean nothing...
Romania fielded their first team for this crucial game while Holland (who will still be top of the group even though they lose tonight's game) did them a favour by fielding a weaker untested team.
Things did not look good for Italy...
However, Holland's second team did manage to beat Romania 2-0!
So Italy will move on to the quarter-finals to face Spain on Sunday, June 22.