Showing posts from September, 2006
Show all 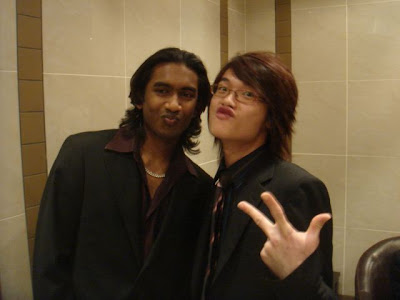 Yesterday, Saturday, night i joined my first ever ball...

It was a kiwi (New Zealander) ball organised by a student hostel, St George.
However, it is not the "ball" that many of you, my readers, think it is...

First of all, it was held at a large sports bar, Chicago Bar, not a grand hall.
Second of all, all you do there is either drink or dance, there is no program whatsoever.
Jz a DJ playing party music, the dance floor & the bar.

Dress up & pay NZ$30 just for 2 free glasses of tap beer or house wine, finger food and a night of dancing & drinking (at your own expense).
You have to put in a LOT of effort to hava good time...
It wud hav been more economical to jz go to one of the local clubs... free entrance...

The only difference here is u hav many many friends there...
And its really wonderful to hav all ur frends around & buying each other drinks...
Dancing with the girls...
It was really a blast!

My date to the ball, Amanda, was rea…
5 comments
Open Full Post »

As she stood in front of her 5th grade class on the very first day of school, she told the children an untruth. Like most teachers, she looked at her students and said that she loved them all the same. However, that was impossible, because there in the front row, slumped in his seat, was a little boy named Teddy Stoddard.

Mrs. Thompson had watched Teddy the year before and noticed that he did not play well with the other children, that his clothes were messy and that he constantly needed a bath. In addition, Teddy could be unpleasant. It got to the point where Mrs. Thompson would actually take delight in marking his papers with a broad red pen, making bold Xs and then putting a big "F" at the top of his papers.

At the school where Mrs. Thompson taught, she was required to review each child's past records and she put Teddy's off until last. However, when…
2 comments
Open Full Post » 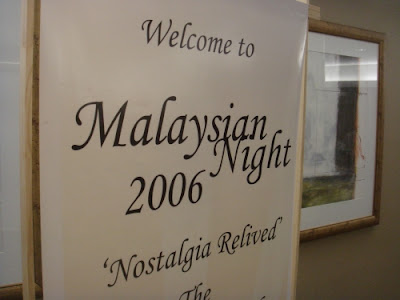 The evening of Sunday, 17 September 2006, was a night to remember...
it was a night of celebration and nostalgia...
it was the Malaysian Night.

It was memorable for me beacuse:
1. I managed to style my "bangang" kiwi saloon haircut and it was very astheticly pleasing to me.
2. Nesa & I managed to get 4 non-Malaysians to pay NZ$45 to join the event.
3. I performed quite well that night.
4. I got to mingle around and chat with some old friends I havent met in a long time.
5. My after party was watching Liverpool vs Chelsea at "The Establishment"!


Here are some pictures of the event...
I will attempt to paint a picture of what went on that night with the pictures plus some illustration.

A Woman Who Reads

The husband likes to fish at sunrise. The wife likes to read.

One morning the husband returns after several hours of fishing and decides to take a nap. Although not familiar with the area, the wife decides to take the boat out. She motors out a short distance, anchors, and continues to read her book.

Along comes a fishing inspector in his boat. He pulls up alongside the woman and says, "Good morning ma'am. What are you doing?"

"Reading a book," she replies (thinking "isn't that obvious!").

"You're in a restricted fishing area," he informs her.

"I' m sorry officer but I'm not fishing, I'm reading".

"Yes, but you have all the equipment. For all I know you could start at any moment. I'll have to take you in and make a report."

"If you do that, I'll have to charge you with sexual assault" says the woman.

MELBOURNE: Malaysian government-sponsored students in Australia and New Zealand will get an increase of up to 100% in their allowance from February.

This has been announced by Higher Education Minister Datuk Mustapa Mohamed to wild cheers from students at meetings in Auckland, Christchurch, Wellington, Sydney and here.

He will be in Perth today and tomorrow.

Mustapa said the revised Public Services Department rates were to keep up with the rising cost of living in Australia and New Zealand, highlighted by strong representation from scholarship holders.

There will be two categories of payments. Rate A caters for students in Wellington, Auckland, Sydney, Perth, Canberra, Brisbane and here, and Rate B for those in other cities in the two countries. 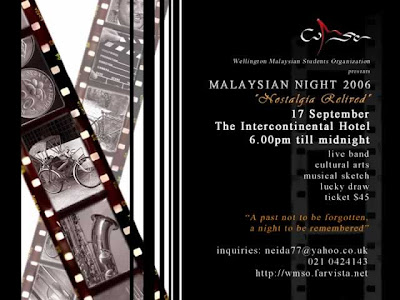 contact me if u need tickets ASAP coz it's going fast!
I jz cant wait!
4 comments
Open Full Post » 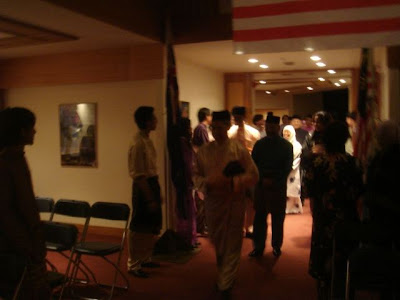 On Sunday the 3rd of September, the Malaysian Minister of Higher Education, Dato' Mustapa bin Mohamed arrived at Wellington airport from Christchurch.
On Monday, 4th September, a welcoming event was scheduled to take place in the evening. The event was also a celebration of the 49th Malaysian Independence Day which passed not long ago on the 31 of August.

The preparations for the event started around one month before the actual day... I myself was involved in a humble part of the preparations... as 1 of the 4 Masters of Ceremony. We, the MCs, decided to run the whole event using solely the Malaysian Language, instead of using a combination of English & BM as suggested by the chairperson. I was a strong supporter for this even thou i knew tat i wud have to put in extra hardwork in practising and face the risk of embarrassment due to my lack of proficiency in the National Language.
True enough, during rehearsals & practices, i faced the stress of being criticised for soundin…
4 comments
Open Full Post »
More posts