I arrived at the LCCT at 7pm.
I thought my flight was at 10pm.
Little did I know, my 10pm flight was cancelled and replaced with an earlier 8am flight!
I was not informed. No email. No phone call.
I missed my flight and I didn't even know it!

Fortunately, the staff of AirAsia are well trained...
There was Syifa & then there was Alif.
Contrary to standard Malaysian customer service where the paying customer is treated worse than a peasant when an issue arises...
They were very kind & gentle with me.
Syifa gently explained the reason for the change.
Alif & Syifa worked fast to give me a seat in the next flight & even double checked the bookings I made for all my future flights!
I believe the manager should give them a big pat on the back. 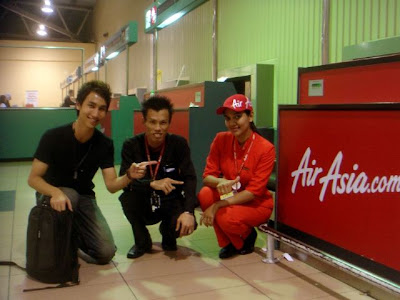 I gave them a tiny box of Beryl's Dark Chocolate as an encouragement & token of my appreciation.
I also wrote an email to AirAsia guest support.
They impressed me & made me feel like a human being.
No other forms of compensation required...
You treated me with respect & professionalism.
That was more than what I would have asked for.

Malaysia needs to learn from AirAsia when it comes to customer service.
AirAsia went the extra mile for me.
I shall be flying AirAsia from now onwards.

AirAsia is not just any low-cost airline...
In my heart, it is a humble carrier with good Malaysian values.
Malaysia truly Asia.
AirAsia truly Malaysian.

Well...
I have 7 hours to spare...
Maybe I should chat up that really really cute & hot Thai chick over there...

p/s: My flight was cancelled because Kuching International Airport closes at 12am.
So if you have a flight arriving after or around 12am, you better double check with your carrier!
Adventures Travels