Resigning from the Throne

- June 20, 2006
As many of you may know, i play a free MMORPG (Massively Multiplayer Online Role-Playing Game) by the name of Utopia. 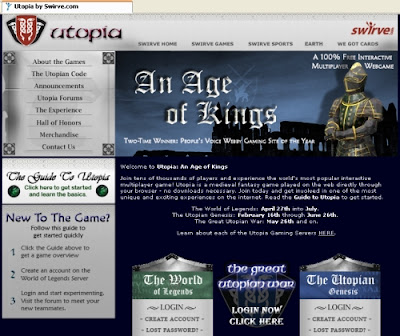 In the game you are one province placed in a kingdom of 25 provinces each run by completely different individuals from anywhere in the world! In this game you construct buildings, explore for new lands, train a military & research science to make ur province stronger. When ur kingdom is ready, wars can be declared against other kingdoms and this is where most of the fun is... trying to defeat the opponent kingdom with ur wits and stratergy!

I really enjoy the game even thou it is mostly just text & numbers. And the coolest thing is I am the KING of my kingdom! the 25 provinces can vote for a province to be the King over the kingdom & they voted for me! The king does all the inter kingdom relations, declaring war and making peace. He also maintains order in the kingdom, resolving disputes & etc.

Well, my story as a King was not a fairy tale... it was a gargantuan struggle and challenge for me to drag my scrappy kingdom from the gutters into the stablility & power it enjoys now! In our last 2 wars, we have completely demolished & disabled the 2 kingdoms! wad excellent results! For this, I thank God, for He has really blessed the work of my hands... wifout Him i wudnt hav been able to gather such a wonderful group of individuals i hav in my kingdom new & harness their power in unity!

However, the kingship is taking it's toll on the welfare of my life in the real world. i constantly need to spend time on the internet monitoring my kingdom, esp during wars, and mentoring the new or less knowledgable players.

Therefore, i hav decided to resign from my throne and be a normal province. I hav elected & declared my more than willing second-in-command to take my place. May he build up from where i left out and take the kingdom to great new heights! Also, may the blessing that i have recieved be passed on to him & may he find his strength in Christ!