- December 03, 2011
A few weeks ago, I told a friend of mine: Once in a while, you've got to do something crazy to remind yourself that you are a living breathing human being. Not some robot doing the same old routine every day.

Since I have to be in Kapit for most of the next 2 weeks, why not make the best of it?
Do something out of this world yet constructive that can only be done here.

Well, I've decided to run every paved road in Kapit.
Don't think it's crazy enough? Take a good look at the map. MAGNIFIED.
I've drawn-out a plan & I'll stick to it unless there is bad weather or I'm left with only 1 leg.
If you're in Kapit, feel free to join me.

This is a monumental moment for me so I will share the story...
the story of koko's Kapit Run...
of 1 man in 1 town with 1 mission. (If you thought about 1Malaysia, like I know you did, you're a bloody moron.) 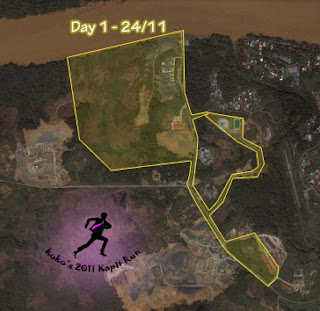 I set out for the Kapit stadium which is roughly a 10 minute jog away.
I have been doing the same thing for 2 weeks already & it was getting boring.
I'd jog to the stadium & around the track a few rounds like a clueless hamster before heading back & clocking in a 30 minute cardio.
There wasn't much to see & the stadium has seen better days.

As I left the house, I thought to myself: Kapit is such a small place. I should really explore it on foot & see how much of it I can cover.
Agreeing with my bloody darn self, I nodded my head & instructed my feet to turn me around & jog down the other end of Beleteh Road.

On my way, I must have looked funny as I nodded to myself some more while thinking what a great idea this was. I decided to conquer every paved road in Kapit & claim my rightful place as King of the Road.
Not to mention, I'd get plenty of exercise & take in Kapit's hilly landscape.
I was also hoping to meet some hot chicks too but apparently hot chicks don't jog on the streets like this darned good-looking nut-case in shorts does.

On my way down Beleteh road, I saw some of Kapit's megastructures. 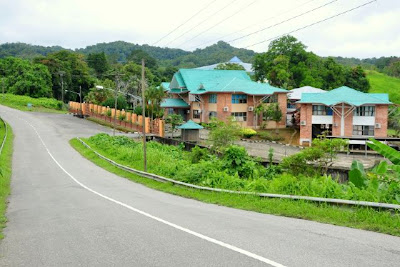 At the end of the road, I came across a concrete pier. At that time, there was a Hilux being unloaded from a small freight boat. I found out that the river was the Rajang River from a local woman who was out for a walk with her children.
(Coincidently, I met her again today (3/12) as I was about to pay for some diarrhoea medicine at a local pharmacy. She went on blabbering in Iban & Malay. I just smiled while working hard to hold it all in. Then, imagine my discomfort as, thanks to her, I had to talk about myself with the pharmacist after she left. My kegel muscles had quite an exercise today.)

Having finished the main road, I decided to go into the minor roads branching off Beleteh Road. The one nearest to the pier led to an industrial area. I could see thick black smog billowing out of the funnels of one factory. I felt my lungs wince at that sight.
As I continued to explore the area, I heard high frequency engine noises & I saw a crowd of people staring a pond. Could it be?
As I got closer, I saw remote control speedboats zipping through the water.
What a marvel! What a surprise! I never expected to find this!

I went into the next branch which led towards the indoor stadium & public swimming pool before heading back home to the nagging of my aching right knee. I slapped it with a pack of leftover cocktail sausages from the fridge to shut it up.

Today, I jogged for about an 1 hour but it didn't feel that long because I saw another side of Kapit that I wouldn't be able to see speeding by in a car or a bike.
It was a great achievement for me & I was motivated to explore the other branches off Beleteh Road.
Adventures Travels