To Girls Who Want To 'Make Friends' With Men

- October 15, 2008
Just last week I experienced the shameful attempt of ah beng in pursuing a 'lady'.
Today, I saw a reversal of roles.
My Indian housemate, Guna, has been harassed by the sister of an Indian student from the school he did his practicum at.
She has been sending him loads of sms, making loads of intentional missed calls & actual calls.
This has been going on for quite some time already.
Guna has been able to ignoring her even though she is persistent in her demand for affection.
I admire his patience.

Today, her actions got on my nerves.
I was trying to relax & watch a really good movie in my quiet room with my friends.
Everything was good until it was rudely interrupted by the ringing of a phone. Guna's.
It was her. Another one of her intentional missed calls.
The silence after that was a welcome one which was gratefully used to enjoy the movie.
But she miss called again.
And again. And again. And again.
I was pissed.

Soon her rude interruptions turned into an actual call.
Which I gladly answered for Guna.
I never thought that I would ever have my dialogue with a lady inspired by ah bengs...
Yet that was exactly how I fashioned my speech when I answered the phone. 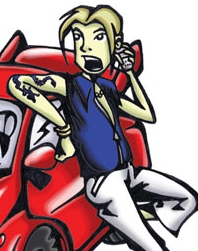 The following is the exact dialogue:
(Me in red; Sister in brown)
*in a rough ah beng style* Hahloh!
*confused* Healo?
Who is this?
*a very surprised Indian* HAH??
*realising my English was too standard for an ah beng* Who dis?
*silence* .....
Wai yooooo kip calling my fon? HA?

She hung up after that...

To girls who want to 'make friends' with men.
Forcing your way & harassing will not win any hearts.
Leave this horrendous feat to men who have got no taste (exp: ah bengs).
You should be more graceful, refined & demure than men are.
That is what we will love you for!
Never bring yourself down to our level.
If you act like a guy, we will treat you like a guy!

The next step is a tougher one.
Do not use your body as bait because the fire that consumes both of you will die out as quickly as it has risen.
But in other ways, concede to his wills & his desires.
Listen carefully when he speaks to you for his words can be used to win his heart.

It is more difficult to pursue a guy because once he gets a little hint of your intentions, he will be immune to all your subtle advances.
Remember that men are men & they like women to be women.
Try your best to be the best woman you can be & you will find that getting a guy to like you will not be too hard.
Stay positive & do not be afraid of heartbreak!
The Gentle Sex