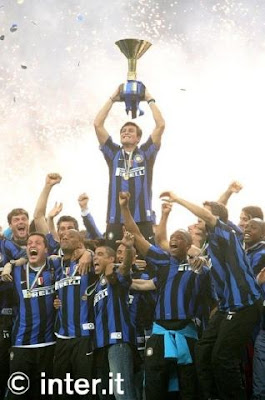 After last night's fixtures, Inter Milan have won their 16th Scudetto Trophy!
They are top of the 2007/2008 Italian Serie A after beating FC Parma 2-0.
2nd placed AS Roma only managed to draw 1-1 in their game with Catania Calcio.
Newly promoted Juventus FC is at an impressive 3rd place.
Juventus was relegated to the Serie B last season after being found guilty of match fixing & referee bribing. This situation forced them to sell many star players but they pulled together to win the 2006/2007 Serie B & be promoted to the 2007/2008 Serie A.
From their performance in the Serie A this season, they have proven themselves to be truly a resilient side. 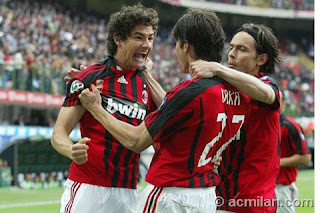 Despite winning against Udinese 4-1, AC Milan were still unable to attain 4th place in the Serie A because Fiorentina, who was & currently is 4th place, also won their game against Torino, 1-0.
Milan failed to qualify for next season's UEFA Champions League but 5th place actually qualifyies Milan for a different though lesser Europoean competition, the UEFA Cup.

Milan, do your best!
Let's be champions next season!
=D