'We Move The World' Concert by SMK Batu Lintang Choir

- January 16, 2011
This weekend, I returned to Kuching to show support to my beloved choir teacher, Mdm Luk, & her fund-raising concert to send the BL school choir to compete in the 1st Vietnam International Choir Festival & Competition. 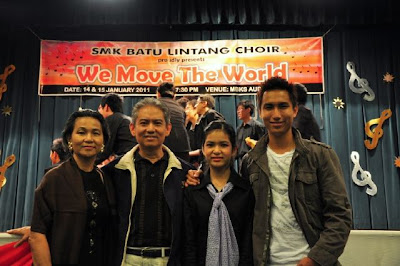 At the same time, I attended the concert to support my lovely youngest sister who was the only sibling after me to take part in the school's prestigious choir.
She only recently joined & may not take part in the Vietnam competition but she is only in Form 2 & has many more competitions to look forward to.
I am secretly very proud of her. =) 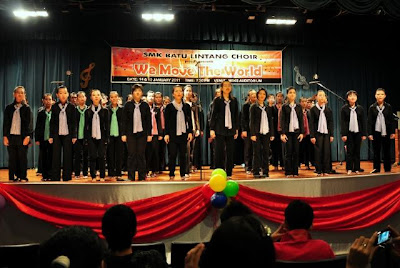 At RM25/RM50 per head, they put up a great show that lived up to it's 'hefty' (the people in Kuching are extremely stingy) price tag. I actually paid a total of RM400 thanks to some return air tickets.
The choir was excellent & much better than it was during it's pioneer years.
I know because I was part of the pioneer group.
I dare say the level they are at today is 3 or 4 times better than we were when we first started out.

The pauses were chrisp & the harmony was smooth as silk.
When I closed my eyes & tuned in, the 40 odd mouths blended into 1 sound.
There is a slight issue with dynamics because there was not enough difference between piano & forte. The piano was good but they need to expand their forte to really take my breathaway.

Among the 40 choir members, there were a few who did not give their 100%.
They could be seen lip-syncing & looking around midway through a song!
If they are not serious, they should seriously be replaced because they gave me a really bad impression.

Also, the movements while singing were not perfect. Some members moved to much while others moved too little. Esp when they were supposed to sway from left to right.
It was a mess & did not accentuate the beautiful harmony coming out of their mouths.
Instead, it was distracting & I was forced to close my eyes just to enjoy the song. 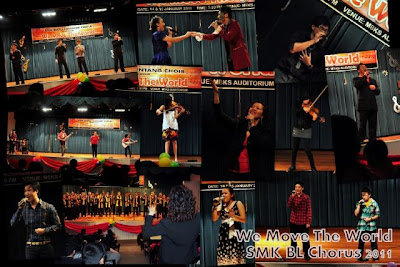 Many other musical talents were showcased that night from multi-lingual singing to golden oldies from teachers to duets to a boyband to dances to an unusual blend of uncontemporary violin playing & jumping about the stage.

I remember sitting there feeling amazed that my old school had so much talent!
I felt both proud & envious at the same time.
If only I had opportunities such as these during my time! ARGH!!

All in all, I had a great time & it felt great to be able to contribute to & witness the beginning of something that is revolutionary & will make a big difference in the lives of many young people. 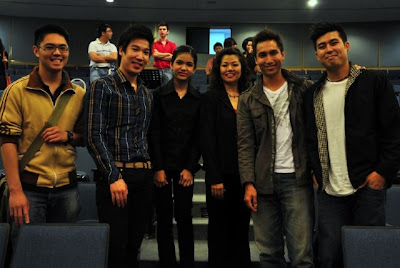 Do your best, guys!
You've got the support of this old boy!