Not In Front of the Students!

- April 03, 2010
In a school, there are certain things that should never be done in full-view of the students.
Among all those, the #1 carnal sin of the teaching profession is:
Telling another off in front of the students. 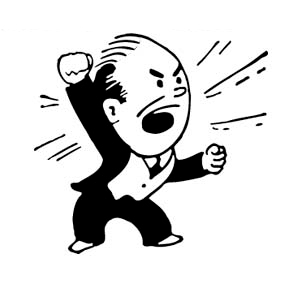 Sadly, I was at the receiving end of such an encounter.
One evening last week, I decided to get the ball rolling with the school's English Language Society & have our very first meeting EVER.
My vision for this society is to form a group of students who will be moulded into leaders to facilitate English language activities in the school.
Most schools would have an open-invitation, but for our society, it's strictly invitation only (since not every student can speak & understand the English language).
10 students with the best English language proficiencies & attitudes were selected from Form 1, 2 & 4.

I was addressing the students when I noticed that several of them were staring at something behind me.
I turned around to find a person of authority in the school.
He was looking dazed & scruffy as if he just woke up. He looked grumpy too.
I greeted him & wondered if there was something wrong.
He asked what I was doing & I told him that I was conducting a meeting for the ELS.

I expected him to dismiss himself but he walked over & asked me how I chose the students. I explained that the subject teachers chose the best students from their classes.
Then, he proceeded to name & ask me why a few students who met the criteria were not in. I explained that the subject teachers chose & I honoured their judgement.
Then, he went on a rant about how that these students were already good & they didn't need my attention. They could just be left on their own. Why couldn't I get a few of the problematic students & try to reform them like the prefects were successfully doing?

By then I realised that he was not in a the right state of mind for a discussion. Furthermore, I didn't have much time left.
I told him that I would take all of his suggestions into consideration & we should discuss these issues at another time & place.
He probably realised that he had overstepped his boundaries too but, before walking away, he went on to say in a very unpleasant tone that those were just his suggestions &, since I was running the show, it was up to me whether I wanted to follow them or not.
In the end, I said a 'thank you, sir' to save him face & continued the meeting as if nothing happened.

Imagine the embarrassment of being interrupted & told off in front of students whom you are trying to inspire to help you & follow you!
I wouldn't mind if I was taken aside & quietly corrected.
I really hurt me & shook me to have someone I respect walk into my meeting & say something against me loudly right in front of my students.
I'm working hard to do something for my school.
heck~~ I'm probably carrying the load of 2 or 3 teachers & still I'm willing to do this EXTRA thing when all those before me did NOT.
This really didn't help at all.

He has since apologised to me & I have accepted the apology.
We are real men who are both working hard to achieve something & I am glad that the incident did not escalate into something bigger.

Prevention is better than cure.
If your teacher is doing something you don't like, tell correct him privately & empathetically.
If you feel that you really have to interrupt there & then, do it discreetly by calling him aside.
NEVER go on a raging rant in front of the students.
Depending on how the teacher reacts, it will either undermine the teacher's authority, your authority or even put both of you in a bad light.

Let's work together to go from strength to strength in our professional conduct.
School Teaching