Put Your Hands Up If You Hate Bus Rides 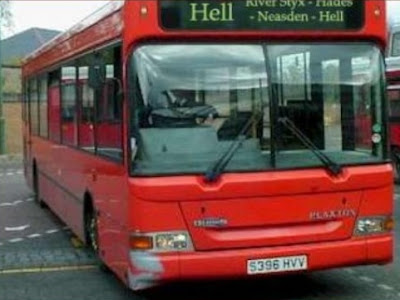 I hate bus rides...
but I'm too much of a beggar to be able to choose something better.
Last Thursday, I had the worst bus ride ever from Sibu-Kuching (est 6hrs).
Have a read & cringe at the horrors I endured.

As I got on the bus & walked down the aisle, I discovered to my great chagrin that I got the back seat.
Those of you who have never taken a bus before (rich baskets!) would think that back seats are great because they're wider & they've got a good view.
NOT! Seasoned travellers like myself would beg to differ.
They actually put FIVE people in the back seat!
Talk about invasion of personal space!
And let's not discuss personal hygiene & pheromones.

So I decided to sleep the hours away but NOOOOOOOOOOOOOO!
Why? The bloody bus had no bloody curtains!
The only ones they had were those decorative ones with the annoying tassles that keep poking at the top of my head!
Imagine trying to sleep with the sun piercing through your eyelids. IMPOSSIBLE!
So I put on my sunglasses & tied the tassels into a knot hoping to find peace...

But NOOOOOOOOOOO it was so unbearably WARM!
It was the afternoon so the air-conditioning was not at it's best.
The sunlight coming in from the windows were not helping neither.
But the worst part is that the engine was right beneath my seat!
I could feel the heat through my seat!
Talk about being in the hot seat!

I sat there hoping for my trip to get over quickly but NOOOO...
The bus driver had to go everywhere & stop in the middle of nowhere.
It was as if he was making deliveries for the mafia or something.
He would stop about every half an hour & he'd take something from his bag & go outside for 5-10 minutes.
Eventually, my trip was delayed by 2 hrs.
Imagine that! Stuck for extended hours on an overloaded bumpy back seat & sweating away like a Peking duck.

As the hours went by, the sun got tired & decided to take a break.
He tagged the moon & the moon gladly took over for a while.
That was when the bus started to cool down.
Initially, the lower temperatures were a welcome relief.
Then, it went lower & lower & lower until it was unbearably cold!
Are there no temperature controls on buses?!!

Furthermore, there was this issue with a familiar hint of stink coming from somewhere on the bus.
It was a silent night & if I listened carefully, I could hear the sound of a splash every time the bus went up & down a bump.
During one of the stops, I noticed that next to the stairs going downward to the emergency exit was a door with the symbols for a lavatory.
**gasp** We were carrying a septic tank with us all this while!

At one point of time, the bus stopped for a few youngsters waiting along the road.
They found vacant seats together & the bus moved on.
They obviously got bored after a while because they started playing cheesy old school music really really LOUD!!!
You know, the kind of music you'd hear blasting at pasar malams or dodgy karaokes.
WTH, man? Does this bus belong to you?
There are at least 30 other ppl on the bus, dumb as!