- September 10, 2007
Last weekend I had the rare opportunity of watching a rugby game at a severly discounted price. Furthermore, I also had the opportunity to watch a football game for free in the same weekend!

Both games were at the majestic Westpac Stadium in Wellington CBD.

The Air New Zealand Cup Rugby Match:
Vodafone Wellington Lions vs North Harbour Rugby Union
I watched the rugby game on Friday evening.
I got tickets that were usually worth $40 for $10 through the subsidising of the International Student Council. Going to the rugby game was one of the many events organised & subsidised by the council. 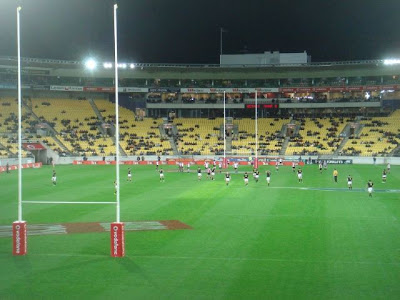 This is how a rugby pitch looks like...
There are two sides in the game; both sides fielding 15 players.
The objective of the game is to score tries.
To score a try, a player has to bring the ball past the opposite end of the pitch; pretty much like scoring a touchdown in American Football.
To be able to do that, you have to overcome certain obstacles, like the opposing team & working within the many rules.

One intersting thing I noticed was the use of bicycles to warm up!
Very clever! 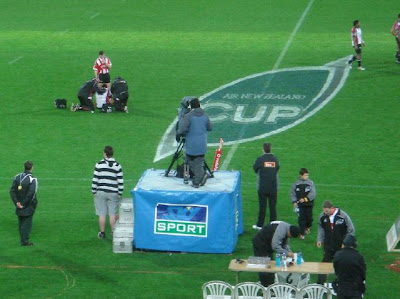 The Hyundai-A League Football Match:Wellington Phoenix vs Newcastle Jets
I watched the football game on Saturday evening.
I got to watch the game for free because someone kind hearted gave me the ticket.
I was selling tickets at a Westpac Stadium ticket booth when I was given a ticket & was told to give it to anyone who wanted to by only one ticket.
So... I took the ticket & went to the game myself!
Thanks to the kind man, whoever you are!
=D

Having watched a rugby match the day before, I could compare the two matches.
The most significant difference was the spectators.
In the rugby match, all the spectators were quietly sitting in their seats & most were quietly enjoying the game in their private space. I felt sleepy during the game.
In the football match, however, the spectators were emotional, excited & responding instantly to every single move on the pitch with both their mouths & bodies.
It was noisy but more welcoming & entertaining to watch the football match instead of the rugby match.


After observing the spectators, I discovered that the most roudy group was seated at a particlar section of the stadium. The major source of the chants was also from that particular section.
I then realised that even the Wellington Phoenix is followed by football's infamous, the hooligans.
They are the Yellow Fever. You can catch them on the streets of Wellington wearing their yellow t-shirts in support of their football club as well as clearly stating their affilation to the football bloom that is occuring in Wellington.
If they can even maintain their current level of enthusiasm, football will no doubt be the most exciting & popular sport in Wellington!