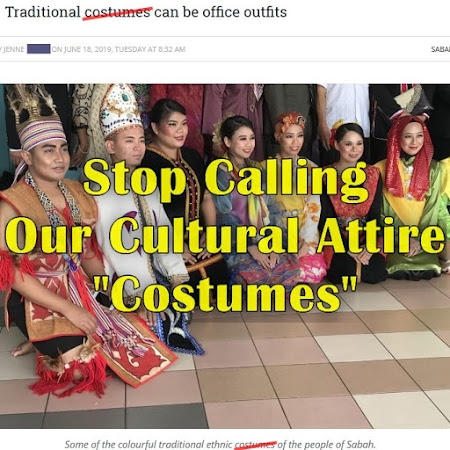 Our past colonizers left us a wonderful gift in the form of the English language, but neglected to also include an understanding of the nuances that permeate their language. After reading this headline, "Traditional costumes can be office outfits", about the laudable move to allow civil servants in Sabah to dress in cultural wear on Thursdays, I cringed at our continual use of "costume" to describe the clothing from our culture.

I'm sure you're thinking...
What's your problem? You're too sensitive! We've been saying that since the good ol' days.
Actually, the words we use really matters quite a bit. I.e., describing the same student as "problematic" or "challenging" matters, because it reveals our underlying beliefs & attitudes towards the subject.
We learned English from the white man & little did we know that we've mimicked their underlying beliefs & attitudes as well.
Therefore, ladies & gentlemen, it's time to decolonize...

This funniness that you feel is a result of a dissonance between the offending phrase being checked against the millions of English phrases you've read that's stored as word patterns or collocations in your subconscious. In your mind, "formal" + "costume" sounds funny because "costume" is a word that's commonly used for stuff people wear on Halloween, or clothes people wear for fun to pretend to be what they're not.

What word should we use instead? That's up to you. You're an educated person. There are plenty of synonyms to "clothing" that are appropriate. Personally, I prefer to use "attire" to regard our "cultural attire" at equal standing with "formal attire".

Back in 2011, students at Ohio University begun campaigning against the use of cultural attire as costumes for Halloween with the slogan, "we're a culture, not a costume". They are a minority where they live & they are demanding that their culture be regarded with respect. It's ironic that we take our own culture for granted & are content at using a belittling term for our cultural attire.

Isn't it time that we give our Baju Melayu, Cheongsam, Saree, Ngepan, Sinuangga, and other cultural clothing a name that reflects their stature & our aspirations for their appreciation & acceptance in daily life?
Intellectual Deliberation