I Pledged As An Organ Donor. You Should Too. Here's Why & How.

- March 09, 2015
When I was a child, I watched those American movies (or was it Indian movies... I can't remember exactly...) where the main character or someone emotionally close to him is in desperate need of organs but is put at the bottom of a long waiting list because they are normal people just like me with not much money & would die in a certain period of time unless a miracle donor appears.

Being the sweet little thing I was (you can ask my mom about how 'sweet' I was as I was jumping from furniture to furniture & skilfully evading her capture), I developed a deep desire to be that mysterious miracle donor which appears out of thin air and saves the day for a sobbing & heart-warming happy ending.

My girlfriend was way ahead of me. She signed up silently last year & I only discovered it when she shared a photo of her donor card on Facebook. Embarrassed that I didn't think to do so earlier, I decided to follow her wonderful example this year & pledged to donate all my organs at my death. I'm currently awaiting my pledge card.
You can too. Sign up at www.dermaorgan.gov.my/daftar.

I worried that the person I saved would go on to fart in elevators or join a terror group!
I worried that doctors would kill me & sell my organs on the black market for a BMW.
I worried that the government would kill pledges to harvest their organs for "the greater good".
What if there is some dying psycho who hacks into the lacklustre security of the site, tracks down the people with the exact organs he needs to survive & kills them along with the people ahead of him in the waiting list? 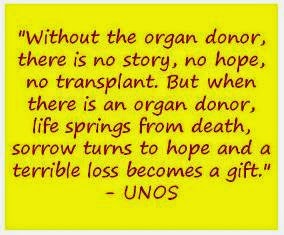 Then, I realised that those were excuses from the fear I had inside me. The fear that keeps me selfish. Honestly, what the heck am I going to do with my organs when I'm dead?
I'm not going to live my life driven by fear. I'll pray for my organs to be a major blessing & give them away happily so that someone else might live.

Everybody deserves a second chance. Even ash holes.
You never know, you might be at the receiving end of one of these mysterious miracle donors. Wouldn't you be glad that such people existed? Why don't you become one yourself? What are you waiting for?
SIGN UP NOW!!!

Causes Matters of the Heart