- March 12, 2013
I push my students hard so it's only right that I reward them well.
This is the 3rd consecutive time I've rewarded my school's PMR students who have scored A in the English paper. I started this in 2011 & did another in 2012. I also rewarded straight A PMR students with a trip to Kuching earlier this year.
All with the same purpose: To give my students a reward big enough (students rarely get to go to Sibu due to a poor socio-economic background) to jolt them out of their comfort zones & entice them to aim higher & work harder in the exams (English can be considered a near useless foreign language here where the Iban language is the lingua franca).

Obtaining great exams results is really important for my students who do not have the money or connections to catapult them in life. They are dependent on government/private sector grants & scholarships.
This is why I really push them hard to do well in their exams. Even if it is just PMR, A lesser exam if compared to SPM. However, I think it sets a great foundation for their studies in the upper form & gives them insights into SPM.

Also, I reward them with trips to open up their minds & expose them to glimpses of the world outside of the wilderness. During the whole duration of the trip I discuss social issues relevant to their area, share with them my ideals & brainstorm solutions. I try my best to convince them that they are capable of success & I tell them that success is supposed to be shared so that, in the end, the whole community benefits.

Anyway, enough of the philosophy lesson. Time for some pictures of what we were up to in Sibu.

8 students obtained an A in the 2012 PMR English language exam. I was overjoyed. This was a group I have taught since they were in Form 1. Our school had never had that many students scoring As in English before. Also, we have never had so many straight As.
3 of them were straight A students whom I have already rewarded with a trip to Kuching. Therefore, I decided not to take them along for this trip because gaji cikgu sikit saja mah. 8-3=5. A trip for 5 students would not be cheap but it'll be money well invested.

I love watching movies at the cinema so I'd always catch a movie whenever I can. Anyway, it'll be a wonderful treat for my students.
That night, we watched Jack the Giant Slayer. Unfortunately, it was all in 3D. I hesitated because tickets for 7 people costed A LOT. In the end, I decided to splurge a little bit & paid for everyone's movie. It was worth it!
My students had an absolute blast! They ooed & wowed at the 3D effects. We left the cinema smiling that night.

One of the places I wanted to take them to was a bookstore so that they could enjoy my teacher discount. I usually go to Academy Book Centre so the staff recognised me & gave us all a generous discount.
I also took them to a stationary store for their stationery supplies. It's a stationery store I regular too so they got a teacher discount as well. See how kind I am?

I also took them to the Sibu Heritage Centre & we visited the Cultural & Heritage Museum on the second floor. This museum is really well done. It's worth a visit if you are in Sibu just to learn about the rich history of this town.
This place is also one of the most photogenic parts of Sibu town.

We also went to the market, the night market & I let my students explore on their own while I settled some bills & bought my groceries.
One afternoon, I gave each of them a ride on my girlfriend, the powerful Kawasaki ER-6f. They loved it! And, I loved scaring the living daylights out of them. LOL!

Sibu is a really good place for food.
Here's a picture of us at the best roti place in town IMHO, New Nur Islamic Cafe. There is an Indian man there who will make the roti fresh at your request. It's got relatively cheap Muslim food too. (Muslim food is ridiculously expensive in Sarawak. I have no idea why.)

We had lunch at Noodle House. It's a non-Halal cafe with the best & cheapest mille crepes in Malaysia! My favourite dish here is the Sizzling Beef with Rice with a glass of hot Black Tea. They've got really great filled Kompia too.

I had to have a Chinese dinner before I went back to the jungle so we visited Nice House Restaurant. It's got one of the tastiest Chinese cuisine in town & also one of the cheapest! Cheap & good! The perfect combo!
We ate until we could not eat no more literally. We left with bulging bellies. LOL. 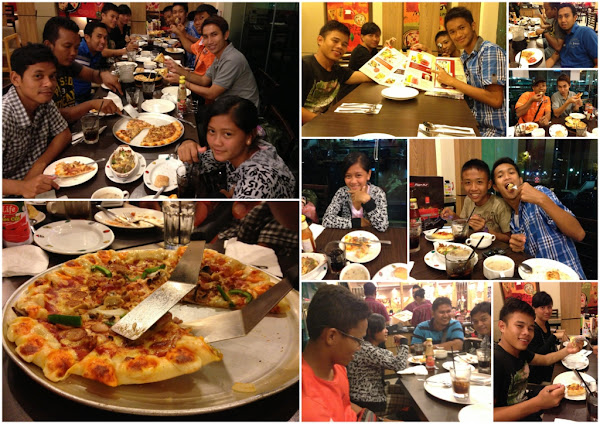 We had dinner at Pizza Hut with a few super cool teachers from my school. The teachers & I split the bill between us like real men & found out that we didn't have to pay much actually. We could have ordered more food. haha~~~
Surprisingly, I discovered that some of my students disliked mushrooms & wouldn't finish the mushroom soup. Strange. I thought everybody loved mushrooms. 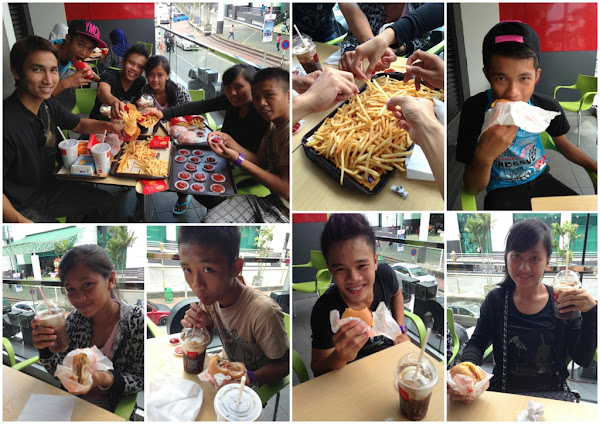 McD is a happy place for many children so I took them to McDonalds for lunch. Cheaper mah from 12pm-3pm.
I haven't been to McD for a while. I've actually outgrown fast food & am now seeking healthier alternatives. Anyway, is it me or have the burgers shrunk? Nonetheless, we had a good time enjoying each other's company.

Finally, I'm sure you're asking: how much? It's actually not much.
I spent a little over RM1000 on 7 people for transportation, 2 nights accommodation, food & entertainment.
For such a small amount of money, I'm sure I gave 5 of them a memory they will cherish for the rest of their lives. Hopefully, just hopefully, this memory contributes to their success in the future. May their success bring sustainable growth to their beautiful unknown & humble home.

View all the pictures here on my FB Page.
School Teaching Travels