As an educator of the future leaders of this interior area, I felt that the students here are unaware of the environmental impact of the actions of their community.
The students come from longhouses located throughout the bank of the Katibas River.
There is no proper waste management. Rubbish is casually thrown into the river. Including plastics, waste metal & domestic chemicals.
The people live for the present & do not think of the future repercussions of their actions. Occasionally, they will poison/bomb/electrocute certain areas of the river for fish.
They hunt wildlife for food & as a source of income. They hunt birds, monkeys, deers, wild boars & anything big enough to be eaten. Add logging & deforestation into the mix & we have a really bleak future for the local fauna.

I addressed all these issues & more in a short presentation.

Then, I divided them into 3 groups & gave them instructions to design 3-part banner.
Each student must also write down their wish for the Earth & sign.
The 3-part banner will later be combined & displayed in the school hall.
The students were really creative & they really got into it.
In the end, we had a really good banner that received many compliments.
Awesome job, boys & girls! 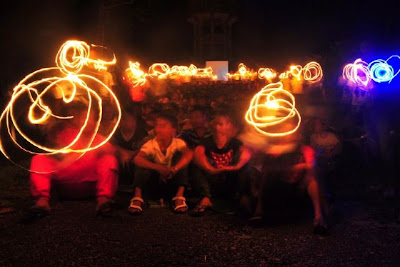 During Earth Hour, we went outdoors, lit our candles & enjoyed the warm golden glow under the stars.
I had a big battery, laptop, projector & screen set up displaying the lyrics to an abridged "Big Yellow Taxi" which I rehearsed with the Prefects before the event.
We sang the song a few rounds & then sang some worship songs.
We ended with prayer for the Earth where students took turns to pray out loud in groups before a concluding prayer by the CG teacher.

Although, I didn't get to do everything I planned for this event (I greatly underestimated the amount of time required to move 600 students from one location to another) & the location was not the best (it was too small & there were too many open drains in its area), the teachers involved enjoyed themselves tremendously & said that the event was beautiful & meaningful.
I haven't had any feedback from the students but I've got a lot of ideas in my head on how to do it better next year.
Next year, I will do this again... BIGGER & BETTER!!

Perhaps you could bring Earth Hour to your school too...
When you do, do write about it & share it with me!
I will gladly share what you've done on my blog!

Here is a video I made of the event: