- October 05, 2010
There was a time when I was less stubborn, very suggestible & still somewhat clueless to the female psyche.
At that time, I was walking next to a good friend of mine who had broken his arm or leg or neck or whatever it was.
As we passed by this pair of attractive females, they checked out his injury & cheekily imparted these 3 divine words of wisdom: "Injuries Are Sexy".
Right there and then a blinding ray of light shone through the cloudy skies of my mind.
I was proud of my friend & at the same time very much envious.
However, I have learned something that will stay with me for the rest of my life.


As the years went by, I had my fair share of cuts, bruises & hospital visits.
Maybe even more than my fellow male because of my tendency to throw caution to the wind & go all out in competitive sports.
Every time without fail, injuries will attract attention.
From BOTH genders.
The worse the injury the better! haha~~

The males will share a laugh about how unlucky you were & they'd look at you with an air of admiration for the pain that you have endured.
The females will look at you wide eyed with intrigue & awe for your bravery as well as gasp & moan at the highs & lows of your over-exaggerated story.

I recently had an injury that looked worse than it really was.
I've toned down my story to the adults by telling them the truth & playing down the seriousness of my injury.
Still, I walked in pain for 4 days & experience pain even today.
It looks really bad but it is actually merely skin deep. 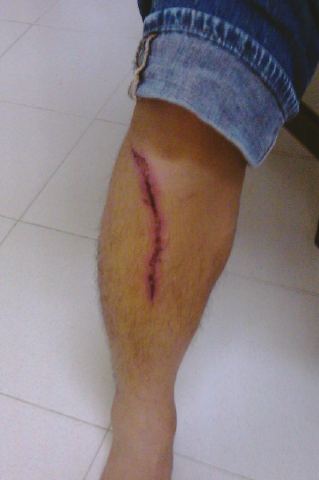 This is a picture of the injury after 4 days. Still looks bad but I've had worse.
I once had gory, memory-loss also an OMG WTF?!
This is a mosquito bite in comparison but, still, I get attention, empathy & wide eyed admiration from both genders.

What happened was I went on a hunting expedition into the jungle behind my school with 2 locals.
They had rifles while I was armed with a single-barrel scoped camera.
As we made our way through the jungle, we saw a wild boar. It was the size of a small child.
One of the men aimed & fired a shot at the boar. It struck.
But it didn't kill the little b*st*rd as it instantly charged madly at us.
To be more specific, it charged at me.

There were 2 guys with guns & this animal blames ME?!
I was unarmed! I didn't even have a penknife!
I was stunned that I stood motionless like a confused idiot awaiting the impending doom galloping towards him.
It hit me & we fell into each other's arms.

We rolled around on the leaf covered ground & wrestled each other like lovers having sex for the first time.
I punched it in the face & it hoofed me in the chest.
Thank God it wasn't smart enough to aim for my crown jewels.
After my whole life flashed before my eyes, I saw two gigantic hands descend from the heavens.
One was holding a parang.

In one fluid motion, the free hand pulled the nose & the other slit its throat.
After several muscle contractions & a loud screech, the beast landed on top of my body; breathing heavily & its juices flowing all over my body.
I got up &, of all places, discovered an injury on my foot.

I roasted the b*st*rd over fire & consumed its flesh as revenge.
Let me tell you revenge never tasted so delicious.
Definitely the best wild boar I've ever had.

That was the story I told my students.
That's the story they believed & so did you... Sucker!
The truth is my leg fell straight into a shrub-concealed drain while I was coming down a hill.
The momentum of my decent threw me forward & as my leg came out of the drain, it scraped the top edge of the concrete drain.
Flesh met concrete. Sadly, concrete won.

I'm glad injuries attract attention.
I'm glad that I'm surrounded by gullible children.
At least when I'm in pain, I get some kind of pleasure.
I love kids!
=)
Adventures School