- May 01, 2010
In the last 2 days, I spent 16 hrs on 6 different boats.
I had to travel to a school more ulu than mine for the inter-school Public Speaking competition.
It was an amazing experience.

The principal & the teachers of the school were very hospitable & warm.
I was the chief adjudicator & 1 of 2 participants from my school got 3rd place.
Honestly, I think that they could have done better.
Every participant has a long way to go to be a good speaker. 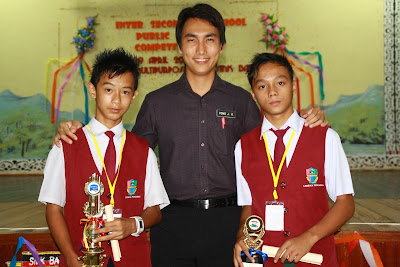 Anyway, that's not the story I'd like the share.
Here's an amusing story one of the teachers shared with me about his exciting life as a teacher at the school.
~~~~~

When the boy saw the principal, his father & some teachers coming his way, he panicked, started his father's boat & sped away leaving his father dumbstruck on the jetty.
The teachers, however, were quick-witted & promptly got the security guard to start his boat & give chase.
They had a good 30 minute high-speed boat chase on a rapid river while dodging floating debris, waves & stones.
Imagine two boats side by side & knocking into each other.
One with teachers trying to grab hold of the other boat while the other trying to manoeuvre away from them.
It must have been quite an exhilarating chase.

Unfortunately for the boy, the guard's boat had a bigger engine so he was soon forced to a river bed.
He was relentlessly stubborn & still refused to return to school so one of the teachers got on his boat while the others returned home on the guard's boat.
A teacher, a boy & a boat.

After a few weeks of school, the boy disappeared & was never seen again.