One week ago, from the 10th to the 12th of August, I took part in the 2 days 2 nights 2007 Church Camp run by Arise Church Wellington. The guest speaker for the camp was Pastor Phil Pringle of Christian City Church in Australia. The church he leads has got a great vision to build 1000 churches with an average of 500 people all over the world. After listening to him speak, I find that he is a great speaker with profound understanding of God's character.

He spoke about the 7 keys of faith during camp. What struck me most from what he said during camp was what he said about God's perspective on time and God's desire to give us our heart's desires. He used a simple illustration with his hands to describe how God views time in an individual's life. I will attempt to illustrate it with this picture.

God views you life like that. He sees the whole thing at once. He knows the start of your life until the end of your life. So if God declares you a warrior when you are weak & timid, like what he did to Gideon (Judges 6:12), he is not being false. This is because he sees your begining, your present & your future. Therefore He does not lie when He says you are healed when you are sick or injured. Nor does He lie when He calls a prostitute pure & loved by Him. How amazing is this God...

Ps. Phil also illustrated something that echoes with something that has been in my heart for a long time. God looks at our heart and one of the reasons for doing so is to grant us our heart's desires. He does not respond to need. He responds to desire. Ps. Phil illustrates this by describing his family. Every morning when his children wake up, they don't say, "thanks daddy for this bed we slept on, this selter we safely sleep under and the wonderful shower & toilet provided for us". And when the get to the kitchen they won't say, "oh, wow, we get cereal and milk too?!" God knows our needs and we need not worry whether He will meet it (Mat 6:25-34)!
One day while walking past a surfboard shop with his son, he noticed his son drooling over the surfboard on display. After looking at the price tag, he drags his son away from the shop. But secretly returns later to buy the surfboard for his son. When he brought it back to his son, the boy got up, pointed at his father and said, "You the man." Like a generous loving father, God knows our desires and will supply them when we seek first his kingdom & his righteousness. (Mat 7:9-11, Matt 6:33) 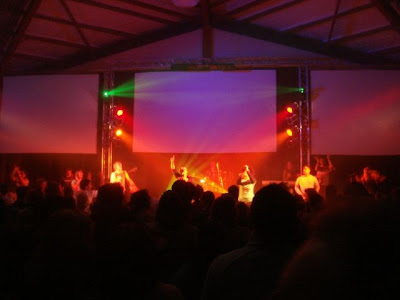 Worship was awesome as usual. People were given a degree of freedom during worship. You can jump around, clap, dance and make loud singing/cheering noises. I did all of that... so did most of the congregation.
We are not dancing for the band nor are we worshipping the music. The worship team only leads us in worship. Never should they take the place of God. Nor should the music take the place of God. It is a medium of worship. We sing those songs because the lyrics relate to us and what we want to say to God. We were lost but now is found and given a great vision for the future! We are also given time in between songs to sing our own songs to God. 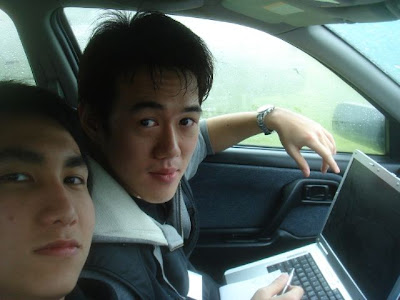 One of the highlights of camp was the Talent Quest. Frank Hsu (Taiwan) & I, Jarod Yong (Malaysia) was given a mandate by Grace Zhang (China & Korea) to produce rap lyrics for a 3 minute & 16 second beatbox of Johann Pachelbel's Canon in D. The video for the beatbox is quite impressive.

Here is the video to our rap act. Even though there were some technical problems that hampered our presentation, like the volume being too soft, the mike not functioning & the time limit. We had a great time performing & our energy was awesome! We had a supportive crowd too! Check it out! =D

Arise Church Camp rocks!
We get to have a good time & spend time away from it all seeking God!
Productions Travels