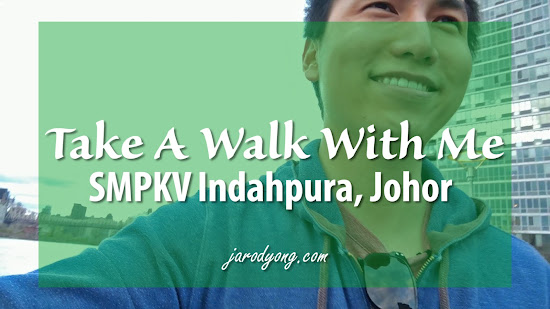 Recently, I took the students of a Malaysian secondary school on a video walk at Gantry Plaza State Park, one of my favorite parks in the city (mainly due to its inspiring view of the Manhattan city skyline). I posted the video on YouTube (for the teachers to show to their students on a big screen, as YouTube accepts more than double the video resolution of...) & Facebook (where a majority of my audience resides).

To think that it started 2 months ago with a simple Facebook message from Cikgu Zaidah, a PK at SM Pendidikan Khas Vokasional Indahpura. At first, I was very intrigued as I had never seen a school with that acronym before. I looked up the school on their website & found out that it's a secondary school providing vocational skills training to students with disabilities (deaf/blind/mute). Besides BM, BI, Math, & P. Islam/Moral, students are trained in either housekeeping, reflexology, culinary arts, cosmetology, & desktop publishing.

I found myself immediately thinking about the school also offering courses in computer engineering like what Kenzie Academy, which is co-founded & run by a Malaysian, is doing for the Rust Belt States in the USA. These students may have disabilities, but their mental faculties are just as sound as those without.

Check out the messages I received from Cikgu Zaidah who took the time to explain the school & the efforts of the teachers at her school to encourage their students to improve in English. Her positivity was contagious. Never once did she lament about her work/students. Students were described like any parent would gush about their children. Immediately, I got a sense that she genuinely cares about her students & wants to do something special to inspire them. As a teacher myself, how could I resist joining such a worthy cause? It must be such a joy to work at that SMPKVIP!


As you can see from the first message, I was given a lot of creative freedom. I could do as little as I wanted. Honestly, I got a sense that all they wanted was just my double-chin yapping away in front of a camera. Heck, I can do that anytime, anywhere. I'm in friggin' NEW YORK! Concrete jungle where dreams are made of! I had to do something with that! Thus, the idea of introducing the students to one of my favorite landmarks was born.

However, I was using an iPhone 6s which had a horrible battery life & an inadequate camera (for my standards). I actually went to the park 3 separate times for 3 different video shoots with 3 different sets of equipment. I didn't want to let the kids down, especially since the entire school will be viewing the video, so I purchased a used Pixel 2 (currently the best camera on a phone).

I have never used an Android before (as my only smartphone experience were with the iPhones 5 & 6s), but I was willing to take the plunge as I couldn't afford an iPhone, Samsung, or DSLR that rivals the Pixel 2's ability to take videos. Together with the phone, I also upgraded my audio equipment by purchasing a budget lavalier mic & wind muff. I noticed a lot of shake in the videos I took (as I was recording myself walking & talking with the camera in my hands) so I purchased a budget gimbal (ZhiYun Smooth 4) too. The gimbal has yet to arrive so I had to do without it in the video I made for the school.

All in all, I spent about $635 on equipment + countless hours researching the location/planning/shooting/reviewing/reshooting/reviewing/reshooting again/reviewing/learning how to edit/editing/publishing. It was a worthy investment as I will be using the equipment for the few years & also work on improving my vlogging skills. One day, I hope I get to be as good as my vlog idol, Cikgu Hailmi. Check out the video below...


Dear SMPKVIP, I hope you liked the video & found them useful. Please respond to the 3 questions I left for you. You can do so in writing (in the comments) or with a video response. I'd love to hear back from you! Finally, I would definitely love to visit your school one day, if you'll have me. Do give me a fabulous makeover when I visit so I can be the prettiest teacher out there. All the best & keep practicing your English!
Collaboration Matters of the Heart Motivation Talks New York Productions School Stories Walk With Me In NYC