- May 10, 2016
In March, I presented a poster based on a paper I wrote for one of my courses at TC. The title of the poster was "Recommendations for the Language Vitality of a Native Language in Malaysia". Those of you who are familiar with my teaching background would be able to guess that I was looking into the ethnolinguistic situation of the Iban language.

Why conduct the study?
When I was teaching at a secondary school in Sarawak, I found that a large majority of the students did not do well academically & at least a quarter of the students could not read or write. This was despite the fact that the teachers were well-trained, the students were very teachable &, being at a boarding school in the middle of nowhere, the learning context was ideal & distraction-less. 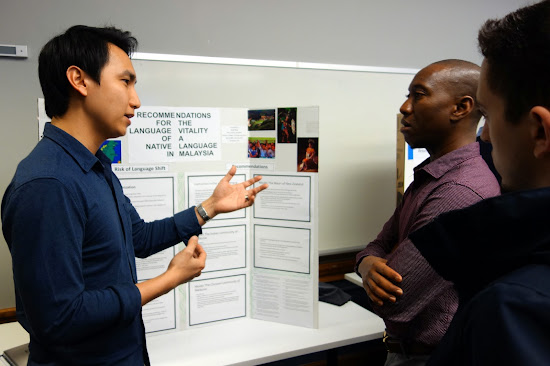 Why do many Iban children fall behind academically?
A possible factor is the difference between the medium of instruction & the language spoken at home. The students spoke Iban at home, but they have to learn ABC & 123 in Malay at primary school. Imagine speaking English at home all your life & then suddenly having to learn your basic literacy & numerical skills in German. I hypothesized that this was a major factor to the academic handicap experienced by the Iban children.

It makes a lot of sense, doesn't it? Use a language that the students already know to master all the basic reading, writing, listening, & speaking skills essential for academic achievement. These skills will then be very useful when learning a national or international language.

What are you going to do about it?
Unfortunately, this is not available to a lot of minority children in Malaysia which is one explanation for the rural-urban or poor-rich achievement gap. This needs to change. When I return to Malaysia, I plan to initiate an early childhood education program for the rural children in Sarawak. I hope to create a system simple enough that it can be replicated all over the country, and, eventually, all over the world.

If you're already doing something similar, I'd love to hear from you & explore possibilities of collaboration. If you're interested in helping out in some capacity, contact me too!
Conferences Iban Intellectual Deliberation Matters of the Heart Orang Asli Presentations