- April 29, 2012
It's been a while since I've blogged. Mostly due to the non existence of internet at school, weekends where I have to stay at school for hostel activities as well as more important things I need to take care of first.
Now that Internet is back (been back for more than a week already actually), I wanted to blog about something else but after reading heated exchanges on Facebook on Bersih 3.0, there was an interesting comment from someone that I'd like to address here. 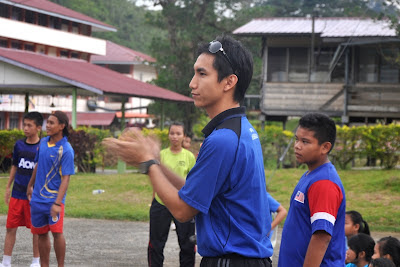 If you're asking, no I did not take part in Sarawak's Bersih 3.0. (I read about gatherings in Kuching, Sibu & Miri.) And no, I was not wearing yellow.
I was in the jungle this whole weekend overseeing the Hostel Games. (I might blog about that. Might.) I was actually wearing Blue: the colour of my team. I had a great time & so did my students but I did keep abreast with what my fellow countrymen were doing far far away.

I am a teacher & I am strictly professional. I will try my best to be fiercely bipartisan on my blog & in public.
I wouldn't want to influence anyone. When it comes to choosing sides, I prefer people to choose for themselves based on reason, honour & foresight.

I believe that it is necessary for someone like Ambiga to risk her life & voice out on behalf of the people.
When not taken seriously, it was necessary for her to call for a demonstration of the people.
The sheer amount of support received by Bersih 3.0 (both locally & internationally), speaks for itself. It lends credibility & weight to the movement.
She thinks that the elections are not 'clean' enough. The people have shown that they agree. The government cannot ignore this.

I strongly support the police. I believe they are necessary to ensure that our country does not fall into chaos & anarchy.
They are merely the fingers & the toes. They are just doing their job.
Anybody who bad-mouths policemen as a whole because of a few bad apples should take a good look in a clean mirror.
The police will still need to take action against those among them who went over the line.
Also, the people who acted violently against the police should be severely hunted & prosecuted.

Anyway, back to why I wrote this post. Something very interesting that came up during a Facebook 'debate' between several of my friends. The topic was Bersih 3.0 & the violence by the protesters.
The interesting comment was something that I hear all the time. It goes a little something like this: The government spent so much money on you & you repay them by going against them? If you don't like how the country is run, you can leave.

I was able to accept that there would be people who would praise Bersih 3.0 to the heavens or criticise it like sheet. Just like anything human, it is not perfect. This we can see from yesterday's clashes. Being from different backgrounds, we would view the events differently.

However, when someone makes a statement like that, it just tickles me in the wrong places.
1. First of all, everybody has a right to an opinion. Those who choose not to form an opinion or easily accepts what is mainstream, are either lazy or zombies.
2. Secondly, when someone gives you a scholarship, it is a reflection of your abilities. They invest in you so you come back to them & improve them. That is what many of us are doing now.
3. What is right is right. What is wrong is wrong. When someone gives you a lollipop, it does not make them totally right or totally wrong. It probably just means that you deserve a lollipop.
4. We need to attempt to see the whole picture for ourselves. We are not 8 years old. Receiving lollipops from someone doesn't make that someone perfect in our eyes (they probably invested in us so that we can see these imperfections & work towards improving the system as a whole).
5. Finally, just because you agree, you are asking those who disagree to leave the country. Is that what you would like someone to say to you when the tables are turned? Go figure.
This is our home. Together. Everybody should be able to stand up for what they think is right & compromise.