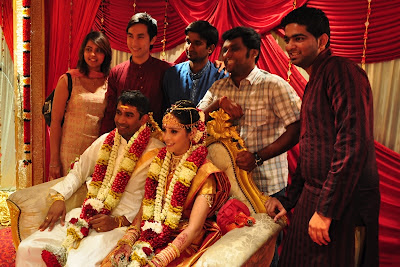 On Friday, 25 May 2012, my best friend got married to a wonderful & beautiful woman. Nesa & Parvina: a match made in heaven!

Earlier on he told me that his wedding would be in August so I booked my flights for a vacation to the Philippines on the 26th of May. However, in March, after his engagement, he told me that it would be preponed to May instead.
There were 2 auspicious dates for the wedding ceremony. The one in August did not fall on a school holiday so it would be harder for friends & family outside of Penang to attend, so he changed it to the date in May which coincided with the first weekend of the school holidays.

I wouldn't miss this milestone in my best friend's life for a million Ringgit! I took 2 days off from work & spent more than RM500 on flights to get to Penang for the wedding ceremony while making sure that I would make it to KK in time to catch my flight to Clark on the next day. What can I say, he's my soulmate & it was worth it.

I arrived one day early in Penang & spent some time with Nesa & his brother, Sara. They were both excellent hosts & I sampled most of my favourite dishes in Penang. Nesa's family was already very familiar with me, including his niece & nephew, as we spent a lot of time together during the engagement. Therefore, I bunked over at his house & had first hand experience of an Indian wedding. Let me share that experience with you.

When I got to Nesa's house, I noticed that it was decorated with a lot of greenery: banana tree trunks & small decorative shapes made from banana leaves. Nesa said that it was a custom but it was like an invitation to rob the house because people knew that there would be gold around during Indian weddings.
Also, the groom could not leave his house 3 days before the wedding while the bride could not leave hers 7 days before the wedding.
During that time, they have to be on a strict vegetarian diet.

For 3 evenings before the wedding, the groom's house hosted various family & friends for a ceremony where they blessed the groom. The married women would take turns to bless the groom with various symbolic items. When they were done, the groom would give them a small gift pack of fruits & herbs. I'm not sure if the men did it too because there were no men around when I was there.
It was a light-hearted occasion with many laughs & excited conversation. After the ceremony, we had a pot luck of home-made vegetarian goodies from the kitchens of the guests. It was good. I had 2 servings!

The wedding ceremony was held at a large air-conditioned hall. The decorations were really grandiose and there was food catered from Sri Ananda Bahwan! I sampled both the vegetarian & the non-vegetarian food. It was heavenly! It certainly lived up to its reputation!
There were many guests that night. Most of them came, dropped off their gifts, ate the awesome food & left. I stayed with the family until the end.

First, the groom & his entourage entered the hall. I was the only yellow skin to be part of the entourage. Got some awkward stares there. The best man followed the groom up the stage while the rest of us sat at the front row. The priest then began his ritual for the groom which took 1.5 hours.
The groom was dressed in his engagement attire. After the ritual, the groom went backstage to change into his wedding attire. It was now the brides turn to receive a ritual from the priest for 1 hour. Then, she too went to change from her engagement sari to her wedding sari.
Finally, they had a ritual together which lasted for another hour. This was the time they did the familiar holding a string & walking around a fire part that they usually show on TV.
When it was all over, they sat on stage & met the guests (LOTS of them) before they had their dinner.

No, it's not over yet! After the wedding ceremony at the hall, they went to the bridal studio for a photoshoot.
Then, the bride & groom went back to the groom's house where the groom served her wife a banana & the two families socialised for a while.
The groom then packed his things for the night because he had to spend the first night at the bride's house. However, they were not allowed to consummate their marriage on the first night. Bummer!

It was a new experience for me & I was glad I did not miss my best friend's wedding.
I wish him all the best & hope to be there for the birth of his first child!
Congratulations, Nesa & Parvina! May you be together forever!

p/s: The bride told me that I could have her husband any time I wanted. Talk about a cool wife! Salut!
B2M2B Matters of the Heart