- October 26, 2010
Every year is unique to a teacher even though he may be teaching in the same school & the same class.
As the academic year draws to an end, let me share with you the #1 act of defiance I encountered this year.

I taught a Form 3 class this year, two actually. But the focus is on this particular one with a majority of borderline fail students which also happens to be a class with a majority of boys.
I put a lot of pressure on them & made them do a lot of exercises.
There was this boy who probably had had enough. Can’t blame him though. I’m a tough teacher.

I gave the students exercises to do after teaching & he was making a lot of noise while the others were quietly doing theirs.
I went over to his desk & sternly told him to zip it & finish his work.
He stopped but did not do his work. He just sat there in a taiko style.
I ignored him & went on to monitor other students.
However, he decided to make noise again.

This time, I returned to his desk, raised my voice & scolded him fiercely.
This caused him to stand up, lift his exercise book & tear it in half defiantly in my face.
Then, he took the torn exercise book with him to the bin behind the classroom, lifted up the lid & dunked the book into the bin before returning to his seat & resuming his taiko sitting style.

I actually wanted to laugh because he was a really short boy & I did realise that I had been pushing them all year.
I was not scared at all. I was actually very entertained. I almost clapped.
From the look on his face, I could see that he felt guilty for his actions.
Sadly, I had to make an example out of him.

I did not get angry. I did not yell.
There was only one thing to do.
I calmly walked to the bin, collected the book, walked back to his desk & said...
“Mari jumpa Pengetua. Yang lain diam & buat latihan.”
Then, I pulled an ear all the way to the Principal’s office. 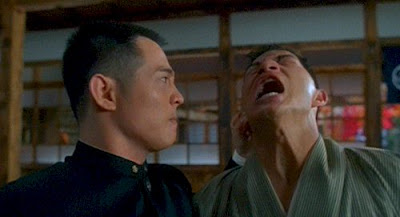 Now you know who's your daddy, right?!!

The Principal was a stern & serious man to the students. He would whack them hard.
The Principal became furious when he heard me story.
He whacked the boy & repetitively asked him rhetorically, “Siapa nak ajar budak macam kamu ini?”
He called him rude & told him that I was a good teacher doing him good.
He told the boy to apologise & the boy did.

He gave me a complete & neat exercise book after 3 days.
The best part is he never caused me any more trouble after that.
Neither did anyone else in his class.
hahahahaha~~~
I love teaching!
School