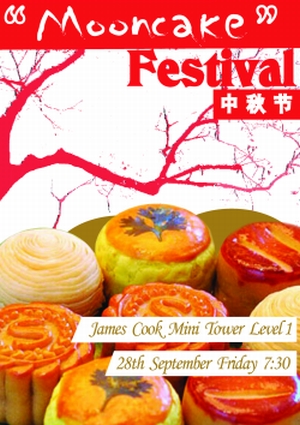 This event was a huge success due to the large turnout
& awesome blessing from above!
Internationals from all over the world & even some kiwis turned up for this event.
I was there to set the place up & found it a gigantic challenge because most of the sound equipment was missing but God was good...
In the end, we were able to make the best of our limited equipment
& there was miraculous provision for missing essential equipment!
**sigh of relief**

The trademark of international lifegroup events has always been the generous amount of good multi-cultural food!
That night did not lack in amazing multi-cultural desserts & lots of tid-bits too!
People had a great time even when there were no mooncakes becasuse the CSA bought all of them for their event the following night!

Looking forward to the next event organised by the international lifegroup!
COME & BRING YOUR FRIENDS!


Here is the video of a performance I took part in that night
Guitar: Jason Khu Violin: Esther Ching Vocals: Jarod Yong (ME!)

This event had a good turnout too!
It also had an array of diverse performances!
From a krump dance performance to the playing of a Morin Khur or 马头琴.
The event also had a generous amount of mooncakes & tea to go around in the after-event mooncake tasting session.

We did 4 songs in this event.
Guitar: Jason Khu Violin: Esther Ching Vocals: Jarod Yong (ME!)

However the audience held themselves back & was a little too passive
except for a small group of friends from the International Lifegroup.
The lack of support didn't stop us from going on stage and giving our best for everyone's pleasure!
We did well too!

This Love
by Maroon 5

Life Is Wonderful
by Jason Mraz

Hey Ya
by Outcast


I was amazed at the level of cooperation in both events.
Internally, the people in both events worked hard and made the best of the resources they had.

I also had the privilage of observing a great transaction between the leaders of two events.
Both sides were aware of each other's event & did not want a clash.
In this situation, the president of CSA, William Wu, gave up the prefered event date, let the International Lifegroup go first & had his event the next day.
He got his reward during the International Lifegroup event, beside stuffing his face with dessert, he recieved an awesome text on the election results that had just been released.
He got elected into the International Officer post of the 2008 Victoria University of Wellington Students' Association executive.

Instead of a clash of egos, I was glad to see humility...
and, even better, humility rewarded...
Divine... Pure inspiration...
Productions